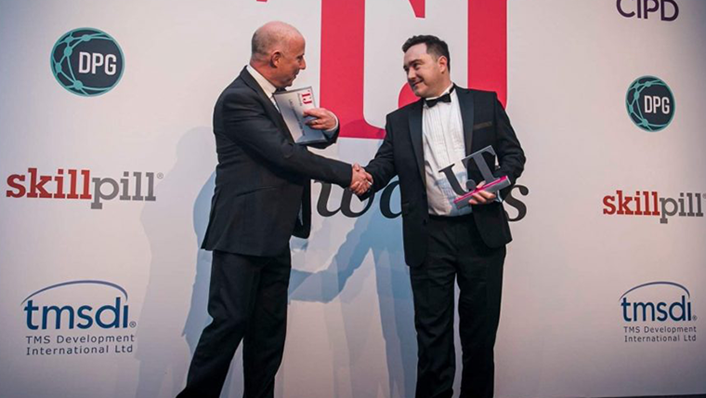 The SSSC introduced Open Badges as a means of giving recognition to social service workers for the non-certified continuing professional development (CPD) they do in the workplace.

Having researched the commercial platforms available, the SSSC team decided to design, build and launch a platform of its very own.

The result was a platform offering digital certificates which recognise learning and achievement.

To date, more than 11,900 badges, filtered into categories such as leadership, mental health and palliative end of life care have been awarded.

The success of the programme resulted in Robert Stewart, lead officer for SSSC Open Badges, winning the L&D Professional of the Year at the 2019 Training Journal Awards.

So impressed was judge Andy Lancaster, Head of Learning and Development at CIPD, he said: ‘Ongoing professional development is an essential factor that lies at the heart of all organisations and Robert’s pioneering and insightful work over a number of years has transformed social services in Scotland.’

One of the big developments coming up is the creation of a smartphone app which will make it easier than ever to capture evidence of learning.

Robert said: ‘This will allow people working towards a badge to make a voice recording, a video or type something up in their workplace, all with just a smartphone or tablet.

‘Evidence you collect through the app will be pushed to your SSSC Open Badges account and can be dropped into your submission when you apply for an Open Badge.’

The new smartphone app is due to launch later this year.

Another change of the horizon is a new focus on peer assessment.

All learners who obtain the first three essential badges will be enrolled in peer assessment and be able to assess submissions for badges they already hold, so they can earn credits that allow them to apply for further badges.

Once two peers make the same decision on a submission, the learner is either awarded a badge or asked for more work on the submission.

‘At the moment people wait up to 28 days for a decision. With peer assessment, we expect that will shorten to one or two days, if not hours, for some badges.

‘The faster someone’s work is assessed, the more likely they are to engage in the process.’

Another development for 2020 is that more badges will require mandatory endorsement before they are considered valid.

An endorsement is a statement written by someone to commend or support an Open Badge someone else has received.

Robert said he believes that key to the project’s success is the recognition participants get for their learning and achievements:

‘People can also see the evidence to support a badge being awarded and can compare that to other people’s.

‘Participants have also commented that they like the fact they have control of Open Badges.’

With all that going on, the future’s sure to be busy for Open Badges.